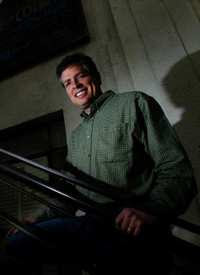 Watch out, Hollywood: The Republicans are invading!
latimesblogs.latimes.com
Aug 7 2008

You may think of David Zucker as one of those uproarious Zucker brothers who made the "Airplane!" and "Naked Gun" movies. But Hollywood conservatives look upon Zucker as their Paul Revere, their Gen. George Patton, their Oliver North ... any uncompromising, right-thinking warrior type will do. In recent years, Zucker has become one of the most outspoken voices in showbiz conservative circles who believes that Hollywood is in "a new McCarthy era" because of its hostility to conservative views. He's also convinced that Democrats are weak, foreign-policy appeaseniks. As for Barack Obama, Zucker says: "Obama is not qualified to be president, and it'll be a disaster."

Having already made a series of agitprop videos mocking Madeleine Albright, pro-tax congressional Democrats and the Iraq Study Group, he's now graduated to a feature film spoofing liberals of all stripes and sizes. Called "An American Carol," it will hit theaters in October, released by Vivendi Entertainment's new feature film division. I tried to talk to Zucker myself via his PR people, but didn't get anywhere. However, the new issue of the right-leaning Weekly Standard has a fascinating profile of Zucker, examining his odyssey from ardent Barbara Boxer liberal to flame-throwing Dick Cheney conservative.

The story also offers a treasure trove of excerpts from the film, which lampoons a host of prominent liberals and showbiz types, from Michael Moore to Rosie O'Donnell, with even a couple of jabs directed at Obama. It also features a host of notable Hollywood conservative actors, including Jon Voight, Kelsey Grammer, James Woods and Dennis Hopper. They are clearly not happy to be swimming in a big pond full of lefties. Grammer, who is friends with Ann Coulter, says he once quoted her pearls of wisdom to some young staffers at his company. As the Standard recounts, the reaction was not pretty:

" 'Ann Coulter,' " Grammer says, recalling their horror and assuming their voice. " 'She's the anti-Christ.' And I said, 'What the f--- do you know about the anti-Christ? You don't even believe in Christ.' "

So how much do Hollywood liberals take it on the chin in the movie? Let's say--plenty ...

As the Weekly Standard describes it:

The film follows the exploits of a slovenly, anti-American filmmaker named Michael Malone, who has joined with a left-wing activist group (Moovealong.org) to ban the Fourth of July. Along the way, Malone is visited by the ghosts of three American heroes--George Washington, George S. Patton and John F. Kennedy--who try to convince him he's got it all wrong. When terrorists from Afghanistan realize that they need to recruit more operatives to make up for the ever-diminishing supply of suicide bombers, they begin a search for just the right person to help produce a new propaganda video.

"This will not be hard to find in Hollywood," says one. "They all hate America." When they settle on Malone, who is in need of work after his last film ("Die You American Pigs") bombed at the box-office, he unwittingly helps them with their plans to launch another attack on American soil.

The film also has a chubby comedian named Rosie O'Connell who's promoting a documentary, "The Truth About Radical Christians," which, among other things, examines the growing phenomenon of nuns as suicide bombers--showing two nuns, strapped with explosives, boarding a bus and inspiring fellow passengers to shriek, "Oh, no! Not the Christians!"

Will this stuff play in Peoria? Can conservatives truly be funny? I'm eager to see if the film is, well, slightly less didactic than the way the Standard describes it. Maybe Zucker hasn't lost his touch. On the other hand, maybe he's become just as humorless and sanctimonious as Barbra Streisand. At the end of the piece he says: "I don't have any desire to be taken seriously. But having said that, I really believe this stuff. Why can't I put it out there. I'm scared to death of Obama. If I didn't do something about it, I would feel--my kids would ask: `What did you do in the war Daddy?' [My answer]: I donated my career to stop this s---."