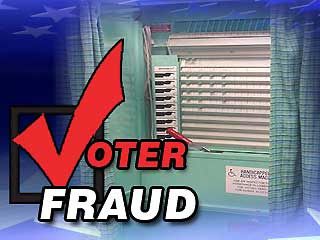 Eric Shawn, on behalf of Fox "News," on behalf of the RNC, continued their disingenuous and misleading "voter fraud" series over the weekend. As usual, they highlight phony fears of Democratic "voter fraud," naturally, while noting that there are "increasing cases" at what "some consider an alarming rate."

Again, and predictably, they recycle the same old, previously debunked ACORN bullshit in the latest segment. Prepare to hear more of the same, always mentioning ACORN by name, non-stop between here and November.

Trouble is, there are a few important points that Fox seems to forget to note when they join the Republicans in their misleading swiftboat campaign against ACORN. And then there's that one, rather notorious case of voter fraud felony that, for some odd reason, they seem unwilling to discuss in their continuing "investigative reports"...

In fact, ACORN has turned in a number of fraudulent registration forms from a few rogue workers in the past. But, as usual, Fox/RNC fails to note that it's ACORN themselves who verify each registration form before turning them over, as they are required to do by law whether they are fraudulent or not, to officials. The group flags the ones that can't be verified as potentially "fraudulent," before turning them in, as they are required to do by law. (Figured that was worth mentioning twice.) ...

We reported on the slimy new Fox/RNC "voter fraud" propaganda effort in May, when they first introduced their "special investigative series," and encouraged folks to send information to their special email "tip" address (VoterFraud@FoxNews.com) about Ann Coulter's no-uncertain-terms case of actual voter fraud which she committed in Florida. (Our years-long coverage of Coulter's fraud is detailed in full here and documented in full here.)

Despite the hundreds of BRAD BLOG readers who sent those "tips," Fox has yet to manage, as far as we know, to find time to report on Coulter's absolutely-proven case of third-degree felony voter fraud. Feel free to let 'em know again, and send them the links mentioned in the graf above. We'll be happy to appear on FNC anytime to back up our reporting. For some reason, the phone has yet to ring from them.

As News Hound's "Chrish" noted today ... t's the image, the perception, the psychology of storylines that is so important, not actual facts that might interfere. FOX is setting the stage for complaints of Democratic voter fraud come November when FOX candidates lose, should traditional Republican election-rigging tactics fail, delegitimizing the Democratic winners from the get-go.

Yup. Precisely. Though the misleading complaints will come beforehand and will be used by Fox and the Republican to try and keep legal, legitimate (even if they're Democratic-leaning) voters from being able to cast their votes at all. Fox and the RNC, of course, despise democracy.