“The truth that survives is simply the lie that is pleasantest to believe.” - H. L. Mencken

We have often questioned why our most reliable market (and economic) indicators have been pointing toward a recession for more than a year (and in one case, three years) even as government statistics have shown the economy to be growing and inflation relatively benign. This week we examine why.

But first, here is a noteworthy quote that appeared in the opening screen of Chris Martenson’s excellent 16 minute video entitled Fuzzy Numbers that provides a hint.

“Ever since the 1960s, Washington has gulled its citizens and creditors by debasing official statistics, the vital instruments with which the muscle and vitality of the American economy are measured.” – Kevin Philips, April 27, 2008 Harper’s magazine entitled Hard Numbers: The economy is worse than you know.

It is no secret how fast overall debt has grown and how government agencies fudge the numbers to make the economic picture appear far more pleasing than it really is. This week we take a closer look at how they do it.
Why has the spotlight of media attention suddenly illuminated this problem now? We’ll explore this question in a moment.

Since the U.S. was taken off the gold standard by Richard Nixon in the early 1970s, the government has become far more creative at using inflation indicators to lull citizens although real inflation has skyrocketed, especially come election time. The double whammy is that they are also artificially boosting economic growth figures. As Martenson points out, various administrations, both Republican and Democrat have used some very clever methods to achieve this end.

Real growth occurs when inflation is low and economic growth is high. Martenson tracks how each president from JFK to Bill Clinton has added his own special sauce in dealing with undesirable stats to make things seems rosier than they really were. While these fibs have grown in both proportion and scope, their forecasting value has steadily declined.

How has this goal been achieved?

In an effort to keep inflation down and accentuate growth, statisticians shamelessly distort and manipulate the data. For example, the Consumer Price Index measures inflation in part by comparing a basket of goods over the years. But what is not publicly understood is that each year, that basket changes. In 1996, Clinton instituted changes to how the statistics are calculated that provided government economists with three new powerful methods to fudge the numbers; substitution, weighting and hedonics (derived from the Greek word for pleasure). They in effect, give government agencies three new tools to change the way they measure and present inflation and economic data at their pleasure.

Here is just one example of how one of these tools, namely substitution, works. If the price of salmon goes up too much, the Bureau of Labor Statistics substitutes it for a cheaper food item like say hot dogs. The result is that from 2007 to 2008, CPI showed a 4.1% rise in the price of food. But according to the Farm Bureau, that tracks the same basket (without using substitution, weighting or hedonics), food prices actually rose 11.3%! 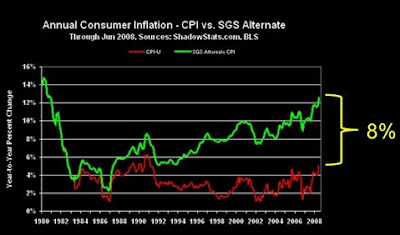 Figure 2 – Difference between how CPI is calculated today by the BLS and how it was calculated in the 1960s without all the smoke and mirrors. As a result real inflation is now running at 13% not the 5%, the BLS would have us believe. Chart ChrisMartenson.com Fuzzy Numbers.

Without a doubt, hedonics is the most insidious tool in the hands of government statisticians. It allows them to creatively reduce CPI (inflation) on one hand while making economic growth appear bigger than it really is on the other. Without giving away the whole story, these minions can change the price of a product, service or good by imputing a higher value (in the case of the economy) to make growth appear greater while imputing a lower value (in the case of an inflation measure like CPI) to make inflation appear lower than it really is.

Hedonics, substitution and weightings changes currently represents 46% of reported CPI and 35% of reported GDP growth according to Martenson. In other words, about one-half of the CPI reported is real while less than two-thirds of reported GDP growth is real. The result is that inflation is growing at least twice as fast as CPI shows while economic growth appears to be nearly 50% greater than it really is.

What if CPI were calculated the same way it was in the 1960s? Using the techniques employed more than 40 years ago, John Williams of ShadowStats.com estimates that CPI in 2008 is running at 13% not the 5% reported by the BLS (see Figure 2). It’s no surprise that some economists are quick to discount Williams's conclusions but one only has to examine the rapid recent rise in global inflation to see the problem. Even with all the fudging techniques now used by government, the problem eventually becomes impossible to hide once it becomes acute.

It doesn’t take a genius to realize what will eventually happen if inflation is continually under-reported while the economic output is distorted higher.

Those who rely on this data to make decisions are relying on increasingly incorrect data and therefore make erroneous decisions – the most obvious of which is to assume the economy is growing when its not. Consumers spend more money (and go further into debt) thinking the economy is better than it is and get themselves in financial trouble. More troubling is that the majority of workers remain oblivious to job losses, an error that only becomes apparent to most when they unexpectedly lose their jobs.

What motivates governments to engage in this deceptive practice?

Undoubtedly, the strongest effect of this practice is seen in the election cycle. A number of studies show that markets do so much better leading up to elections versus after each election is over. What causes this skew? It is the overriding desire of each successive administration to get re-elected.

It is a well-understood reality that voters deal harshly come election time with incumbent governments if the economy is in trouble. Governments know this and over the years they are getting better at perfecting ways of putting voters in a good mood as they get ready to head to the polls. And inflation is the most powerful tool in their arsenal. How much better have stocks done leading up to elections versus afterwards? Read our Special Report that tracks pre-election versus post election gains in the Dow.

Getting back to our first question above, why are these documentaries and reports now gaining public attention? When bubbles are in the process of forming, everyone is too busy figuring out how to profit. It is only when they begin popping and the economy deteriorates that we reflect on our fates.

What happens when the foreigners financing our debt habit, who have also been lulled by government statistics, realize they’ve been duped?
Interest rates will rise as the cost of money skyrockets to reflect true risk.

Unfortunately, this usually occurs at the worst possible time when the economy is most vulnerable and the majority is unaware of their impending fate, if history is any guide.