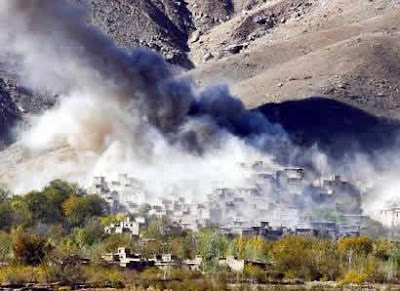 The Bush administration's paid propagandists overseas are at it again. Lincoln Group, a Washington-based public relations firm, which was paid over $100 million by the Pentagon to plant administration propaganda in the Iraqi news media, has now been gifted with a six month, $14.3 million U.S. Army contract to convince Afghans that bombs are bad.

The initiation of the new Afghanistan disinformation campaign by the administration is not out of any concern for the casualties and destruction from the American coalition bombs which have rained down incessantly on Afghan communities and killed civilians at a rate rivaled only the sum of all of the attacks by those we label 'terrorists', but a proprietary desire to further cajole and intimidate the population there into surrendering to their oppressive military authority.

It was in December 2005 that the stories surfaced of the Rumsfeld Pentagon's Lincoln Group, a Washington-based public relations firm, which was being paid by the Pentagon to compliment their effort to bribe Iraqi journalists into writing favorable stories about the occupation. In fact, the NYT pointed out that the Government Accountability Office had found that year that, despite the legality in America of spreading propaganda outside of the U.S. "the Bush administration had violated the law by producing pseudo news reports that were later used on American television stations with no indication that they had been prepared by the government."

The administration and the Pentagon have apparently been able to carry on their propaganda enterprise with impunity, despite the "chilling" scrutiny. It was revealed by the AP, during the time of the first revelations, that an internal memo had surfaced from Dorrance Smith, assistant defense secretary for public affairs, about her new efforts to organize and manage an office within the Pentagon which would provide U.S. propaganda on Iraq 24-hour-a-day, seven-day-a-week to coincide with the anticipated release of Petraeus' Iraq progress report last September.

This time, in Afghanistan, the Pentagon and their Lincoln Group propagandists will be working to convince citizens in Afghanistan that American bombs which are killing their neighbors, families, and friends are necessary and that resistant violence is futile. But, Afghans know too well about the death and destruction they've suffered as they stand in the way of the American takeover and installation of Karsai's compliant regime. It's not likely that they will see the American's aggression as any less devastating than they view violence they've suffered from those resisting the U.S. takeover.

According to the UN, 698 civilians were killed in the first six months of 2008, compared with 430 in the same period last year. The UN report said nearly two-thirds of the deaths this year resulted from actions by the Taliban and other insurgents. The remainder were attributed to actions by Afghan government, American or allied forces as a result of their stepped-up air assaults on the population there.

The increase in civilian deaths in Afghanistan has been openly protested several times by the man we've installed to run Kabul. The deaths of civilians in the fighting have also been a big problem, Karsai said in April of this year.

“It seriously undermines our efforts to have an effective campaign against terrorism,” he said. “I am not happy with civilian casualties coming down; I want an end to civilian casualties . . . As much as one may argue it’s difficult, I don’t accept that argument.”

According to statistics compiled by the air operations center, and reported by the NYT in June (Civilian Risks July 23, 2008), during the first six months of this year, 1,853 munitions were dropped by air over Afghanistan — more than twice the 754 dropped in Iraq during the same period. In June alone, 646 bombs and missiles were used in Afghanistan, the second highest monthly total since the end of major combat operations in 2002.

The information "war" which has been waged by the administration and the Pentagon is a direct assault on the material and opinion independent of the Bush regime's manipulated reporting. It's a direct assault on Americans who would benefit from those outside perspectives on the Iraq occupation and the devolution of the original military operation in Afghanistan into nation-building. In the shadow of the continuing (and escalating) efforts by the Bush administration to control American's perceptions of their increasingly unpopular occupation, there are thousands of credible individuals whose voices will be dominated and bullied by the heavy-hand of our military state.

Consider Bush's initial justification for deploying his paid propagandists. There really hasn't been any proliferation of "images of violence" from our television screens to the degree that they would, themselves, influence Americans away from the occupation, as he claims. There have been, however, reams of reporting which has accurately portrayed the disasters in Iraq and the bungled hunt for the 9-11 suspects in Afghanistan.

The military and the Bush administration can't change perceptions of the bloody tragedy of his invasions and (escalated) occupations by merely changing the subject. There aren't any credible "sunshine" reports of soccer stadiums, reconstructed vineyards, or even marshland restoration in Iraq or reconstruction for their Afghanistan prize, which are at all relevant to the critical questions of our military involvement there. In fact, on his visit to Afghanistan this year, presidential candidate, Barack Obama, was asked by Afghan governors and ministers he met with that financing be provided so it could build up its own institutions, and that the U.S. do something about the countless hundreds of Afghans held in American controlled prisons for years without trial.

Despite the Pentagon's insistence that their propaganda efforts are just directed at Afghans and other overseas, It's clear that they are working to filter their misinformation through the foreign media to, ultimately, have their spin trickle into domestic media markets, bypassing laws prohibiting propaganda directed at the U.S. As Senator J. William Fulbright wrote in 1971, The military public relations campaign is directed at all of the American people ("targets," they are called in the manuals, a nice military word adopted by Madison Avenue and readopted by military PR people in its new sense). The audience ranges from school children and teachers to ranchers and farmers, from union leaders to defense contractors, from Boy Scouts to American Legionnaires. The principal target of the military PR men, however, is the media."

It's not surprising at all to find the administration and their Pentagon accomplices working to put the focus in Afghanistan on the violence which comes from the predictable resistance to their reckless imperialism. What's not as evident is where the Pentagon and the administration intend to begin prosecuting their original mission in Afghanistan; capturing those they've determined directly responsible for the 9-11 attacks on our nation. No amount of PR can obscure that failure by the administration, and, no amount of scapegoating by the paid media shills of the Afghans who've resisted Bush's opportunistic nation-building can substitute for that deliberate negligence. And, no amount of PR can convince Afghans that the repressive U.S. military takeover of their country is any more pernicious that the violence from those resisting Bush's self-serving assaults in defense of their (reluctant) puppet in Kabul.
•••
Ron Fullwood, is an activist from Columbia, Md. and the author of the book 'Power of Mischief' : Military Industry Executives are Making Bush Policy and the Country is Paying the Price