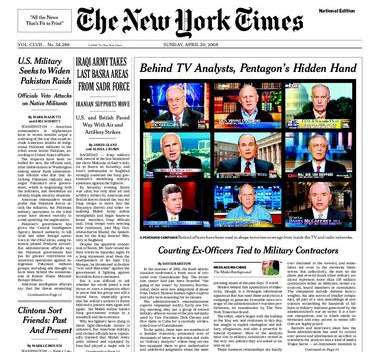 THE PEOPLE WHO RUN television news do not even have enough conscience left to be embarrassed anymore. It used to be different. When a mistake was made, when an ethical breach was discovered, the TV networks or local news stations would go to great lengths to apologize or explain themselves to the public. Today, they mostly ignore the criticism and go on broadcasting as if nothing had happened. A case in point was The New York Times expose of the hidden ties between TV news media military analysts and the Pentagon resulting in a campaign to generate favorable coverage for the Administration's war in Iraq. The Times revealed that several dozen military analysts who came into American homes as experts on all military issues affecting this country, including war tactics and terrorism, were part of the Administration's propaganda machine aimed at shaping news coverage of Iraq, Afghanistan, torture of detainees, and terrorism. Times investigative reporter David Barstow wrote that the "Bush Administration has used its control over access and information in an effort to transform" the military analysts, many with undisclosed ties to military contractors "into a kind of media Trojan horse-an instrument intended to shape terrorism coverage from inside the major TY and radio networks."

The news media giants who hired these military analysts included virtually all of the major TV news media outlets that citizens rely on for their daily information: Fox News, CBS, NBC, ABC, CNN, and MSNBC. As one media critic put it, "This failure of the watchdog not only undermines every standard of journalism, it also poses a fundamental threat to our democracy." Others decried these military analysts' muted criticism of the Bush Administration's war in Iraq in place of an unbiased view of the problems before and during the Iraqi and Afghan campaigns as well as the treatment of detainees and the war on terrorism.

So how did the TY news media respond to this expose? Was an immediate apology offered to the American people? Was there an announcement that the corrupt military analysts had been terminated? Was an official complaint issued with the Pentagon? No, it simply was business as usual-coverage included photographs of nearly nude teenage celebrities, a polygamy raid in Texas, and the news media's favorite subject, the news media itself, this time Rupert Murdoch's taking control of the Wall Street Journal.

The networks not only ignored the story but, by not reporting it, tried to minimize its influence. The Project for Excellence in Journalism studied approximately 1,300 stories from 48 different news outlets and discovered only two during the week of April 21-27 related to the TV military analyst scandal picked up by other media outlets. Those two pieces appeared on the April 24 PBS NewsHour broadcast. This in a time when anything Britney Spears does is fodder for thousands of newspapers and TV and radio news shows around the world.

Fox News, CBS, NBC, ABC, CNN, MSNBC, and other TV news outlets not only ignored the story, but most also refused even to comment to reporters about it. A corporate philosophy of "keep quiet and maybe it will go away" dominated news coverage of this sensational story. The silence was deafening. In years past, TY anchors would look into the camera and apologize for breaches of journalism standards or ethics. They actually would look sorry-and probably were, although their bosses were gritting their teeth that anything like this was taking place on their valuable airtime. Today, though, the journalists with strict codes of ethics either have left the business or know the price of rocking the boat.

News media managers not only no longer believe that it is necessary to apologize for deceiving the public, they feel that it is not even their responsibility to report the story. They do not hesitate to cover media gossip and the competition's embarrassing errors. Yet, when the biggest media story occurs and it involves the largest news outlets in the country, it cannot be found anywhere on cable or commercial television. No wonder the current Administration believes it can do anything, even violate the law, without being held accountable. Pres. Bush and his advisors knew long before the rest of us that the current attitude of the TV news media is: see no evil. Hear no evil. Speak no evil-unless, of course, it involves celebrities, criminals, or animals. That way everyone in government, big business, and the news media can continue to rake in the dollars with no questions asked.

This is one result of the consolidation of the American news media in the 21st century. The giant corporate owners find it more convenient to serve the status quo and the current Administration and Congress than to upset the apple cart. A smooth and symbiotic relationship between government and the owners of the news media is coveted. Criticism, complaints, loyal opposition, and hard-hitting investigations do not serve the best interests of any American corporation; dissent neither is profitable nor helpful to the corporate welfare.

News media personnel care about character and morality as long as it is not their character or morality. For example, if baseball's elite lies, ostracism awaits. With all-time home run leader Barry Bonds facing potential charges for allegedly lying to law enforcement officials about steroids-while revelations came to light that another prime steroid suspect, pitcher Roger Clemens, likely was an adulterer to boot-news and sports commentators emphatically declared that such transgressions should translate into no induction into the Hall of Fame for the individuals involved. A media blitz made sure everyone knew what these players purportedly had done and why they should be condemned for it. Apparently, the belief is that liars and cheats are only fit to run television stations and corporations, or take up residence in the White House.

"... The belief is that liars and cheats are only fit to run television stations and corporations, or take up residence in the White House."

Joe Saltzman is Associate Mass Media Editor of USA Today, professor of journalism at the University of Southern California Annenberg School for Communication, Los Angeles, and director of the Image of the Journalist in Popular Culture, a project of the Norman Lear Center.

http://www.redorbit.com/news/entertainment/1488920/the_medias_blind_spot/
Posted by Alex Constantine at 9:56 AM