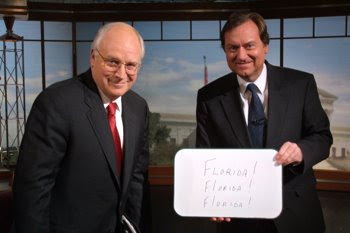 Lewis Lapham's forthcoming Harper's column on Tim Russert is not entirely unexpected, given the cranky literary liberal's public pronouncements on the late host of Meet The Press. But Lapham, sometimes slammed as insufferable bore, has spun a compelling essay out of his rough initial pronouncement that "1,000 people came to [Russert's] memorial service because essentially he was a shill for the government." Maybe Lapham's thorough disassembling is so tasty this time around because the reverence for Russert (not to mention his son Luke) was so completely over the top: two days and three nights of televised memorial, or some 96 hours of airtime, by Lapham's count.

Lapham's column is called "Elegy For A Rubber Stamp," entertains the concession that Russert was probably a good father and friend and Catholic, and then swifty moves on to saying Russert had "the on-air persona of an attentive and accommodating headwaiter," that his "stock in trade was the deftly pulled punch" and that Russert was a "pet canary." Further excerpts after the jump.

"To an important personage Russert asked one or two faintly impertinent questions, usually about a subject of little or no concern to anybody outside the rope lines around ofﬁcial Washington; sometimes he discovered a contradiction between a recently issued press release and one that was distributed by the same politician some months or years previously. No matter with which spoon Russert stirred the butter, the reply was of no interest to him, not worth his notice or further comment. He had sprinkled his trademark salt, his work was done. The important personage was free to choose from a menu offering three forms of response—silence, spin, rancid lie. If silence, Russert moved on to another topic; if spin, he nodded wisely; if rancid lie, he swallowed it."

Worse, even, than Lapham's words is the overenthusiastic praise he presents from Russert's establishment friends.

Madeleine Albright, Clinton's Secretary of State: "As a public official, it was really, first of all, a treat to get on the show."

Cheney aide Mary Matalin: "He never treated [politicians] with the cynicism that attends some of these interviews. So they had a place to be loved."

Sam Donaldson, ABC: "He [Russert] understood as well as anyone, maybe better than

almost anyone, that the reason political reporters are there is not to speak truth to power... but to make those who say we have the truth — politicians — explain it."

It's easy to fall in love with Lapham's alternate view:

"Long ago in the days before journalists became celebrities, their enterprise was reviled and poorly paid, and it was understood by working newspapermen that the presence of more than two people at their funeral could be taken as a sign that they had disgraced the profession."

http://gawker.com/5037400/a-careful-evisceration-of-tim-russert
Posted by Alex Constantine at 10:45 AM