Television Under the Swastika (DVD Review) 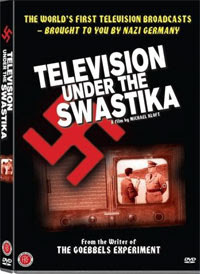 My mother (don’t worry, this will be brief) wasn’t much of a film lover. She was, however, a keen observer and possessed a sharp wit. Once, when I extolled the stunt work of a recent action film I had seen but deriding everything else, she hit me with this nugget: “It’s a Lobster Movie.”

Worried that I had inadvertently described Bruce Willis battling a giant lobster through the streets of New York, I pressed for clarification. “It’s like lobster. It doesn’t taste like anything and as far as I’m concerned, it’s just a vehicle to get garlic butter into my mouth.”

For many years, I have sought a term that would encapsulate an affliction that strikes many documentary films. Specifically, that the skill with which a film is made fails to measure up to the subject matter. Indeed, some documentaries are overwhelmed by the content. In more scurrilous examples, filmmakers seem to borrow the implied sanctity of the story they tell, and treat a critical appraisal of filmmaking skill as an attack on noble intentions.

The latest example I can site of the documentary Lobster Movie is Television Under the Swastika. Written and directed by Michael Kloft, a seasoned chronicler of Nazi Germany (The Third Reich in Colour, The Tramp and the Dictator, The Goebbels Experiment), this film cobbles together archival footage culled from 285 reels discovered in the vaults at the Berlin Federal Film Archive. While no one can argue the importance of German television broadcasts from 1935 to 1944 (from the perspective of world history and TV history), the simple stitching together of surviving footage with minimal or flaccid commentary does little to enlighten the viewer.

Kloft picks up many interesting threads and then discards them just as quickly. A thorough examination of Germany’s place at the forefront of broadcasting history seems a suitable start, countering the accepted wisdom that television began in post-war America. Perhaps an investigation into the introduction of TV viewing as a social phenomenon, with television ‘parlors’ sprouting up all over Berlin, would have helped. There is also the story of Fritz Janek, a television journalist and proficient interviewer who broke ground with man-in-the-street interviews.

Any one of these stories would provide a substantial spine upon which to hang the valuable archival footage. Instead, Kloft summons them to provide the scarcest historical context. As a result, a kind of kinescope collage rolls by haphazardly; and while the newsreel footage of disorganized Nazi rallies provides a necessary counterpoint to the Leni Riefenstahl portrait of Teutonic military perfection, the laughs expected from Ministry of Propaganda officers getting lost in their own rhetoric is, to put it mildly, off-putting.

Kloft broaches the subject of television as propaganda tool, but with a ridiculously light touch; a lingering whiff of camp hovers about the enterprise. While I do not suggest the filmmaker intended to show a ‘lighter side’ of the Third Reich, the kitschy entertainment value in vaudeville and musical numbers concluded with ‘Heil Hiter’s is highly suspect. Even the DVD packaging reeks of this ironic laugh grasp (“And Now a Word from Our Sponsor: Heil!”), which at best is misguided, at worst tasteless.

In the end, Television Under the Swastika is a failure as a documentary but worthwhile as an artifact. Granted, this production is nothing more than an hour-long programmer, the sort of one-off that punctuates MacArthur biographies on The History Channel. Still, if an effort is to be made, then it should amount to something. Instead of a pell-mell sprint across this landmark footage, the option of an orderly search through the material (unfettered by the constraints of the documentary form) would prove more edifying.

“Always leave them wanting more” is not an admirable aspiration for documentary filmmakers; in fact, it is an almost unpardonable sin. That old showbiz adage is best left to performers…and waiters at Red Lobster.
Posted by Alex Constantine at 10:28 PM