Conspiracy Theory Encephalopods are Deranged and Really have the Bollocks (Parody) 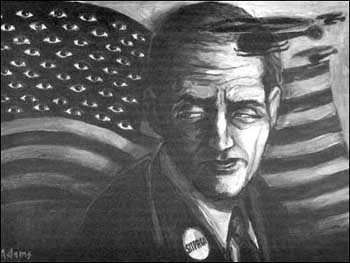 Last night, my ten-year-old daughter was sitting at the kitchen table, fixated on the Internet. I sat quietly by reading my Bible. She turned to me and asked, "Daddy, did commie awiens from the Dawg Star shoot Pwesident Kennedy with a Qwewben-made pawtikel accewewator?"

"Why do you ask, Caroline?" I asked, somewhat lost in moral reflection. "What on earth are you read ... " I peered over her shoulder - you know what I saw - one of those crazy, lunatic, moonbat conspiracy web sites that claims the CIA spies on people.

"That's just a silly conspiracy theory, sweetheart," I said. "It's an immutable stricture of our dual sensate nature that there exists in this chaotic, madcap world a few sad, pathetic, wrong-headed cranks who simply won't accept the government's explanation for human events because they hate George Washington and the American Anthem - like the murder of the promiscuous commie symp John Kennedy."

"No, sweetheart. According to Mr. Vincent Bugliosi, who knows all about it, the shootist was an employee at the Dallas school book depository. His name was Lee Harvey Oswald."

Caroline asked, "Where was Oswald when the Pwesident was shot?"

He was having a Coke.

"It's a little-known fact that the commie dink Lee Harvey Oswald was an Olympic sprinter. He ran the mile in approximately 32 seconds. That bad man Oswald shot Kennedy with a cheap Soviet rifle from the sixth floor, and high-tailed it down the the third floor for a Coke in a blur. He was a bad bad man - and pretty thirsty after killing the president and darting around like the Road Runner."

"Oswald was gifted man, too. He hit Kennedy with a magic bullet that reversed direction inside Kennedy's body, ricocheted off his collar-bone, shot out his left shoulder, then changed its mind about about hurtling away and headed down to rip through Governor Connally's wrist ... "

"Did he know Hawwy Potter?" Caroline said. "What happened to the Magic buwwet?"

I had obviously struck a trigger. She was all ears.

"Well, it laid right down with president Kennedy on his stretcher because it was very tired ... "

My daughter is naive, even retarded, but even with her fine European, upper-class genes, she was vulnerable to the seduction of the conspiracy theory. You know what I mean - those silly, lame, naive, ridiculous fairy tales woven in psycho-nutcase factories by paid agents of Osama bin Laden.

I try to laugh them off, but they're really aggravating. Like the one that claims the IRS does tax audits. I've been paying taxes for 30 years and have never been audited. The IRS has THREATENED to audit me - sure, many times - but a call to Orrin Hatch took care of that. I told him he'd NEVER be on my show again if he didn't intercede, and sure enough, the bastards backed off. So if a simple phone call to your local Senator can gutter an audit, how intimidating can the IRS be?

Obsequious pussies, the lot of them.

But I've heard it all - break-in at the Watergate: routine wire-tap. Iran-contra ... heroes. Martin Luther King? Oversexed - the salacious civil rights leader fell right over from fungus inhalation, but government liberals said it was James Earl Ray to protect his reputation and discredit the South in the Civil War at the same time.

Conspiracy lunatics have an answer for everything. So many examples ...

"Daddy," my girl said. She was gazing at a photo of Robert Kennedy, laid out prostrate by Sirhan's bullet. Here we go again ...

"This man from the Navy says tha' Salvador Awenday and Castwo conspired to shoot Wobet Kennedy."

"Oh, fer Christ ... will you get off ... crazy. What will the next juvenile fixation be, pray tell? Beastiality? I told you, honey, that's a conspiracy theory. Crazy bunk."

"Speaking of which, I've about had it with your insipid conspiracy hallucinations." I handed her copies of of Immanuel Kant's Prolegemana to any Future Dialectic and Pure Reason.

She switched off the computer and turned to Kant.

What was my reward for saving this child from a life of arbitrary confabulations?

More questions ... Some people insist on asking questions, but I never thought I'd give birth to one.

A few minutes later, I looked up from Revelations to find my daughter pieing me.

"Ohhhh ... " Kids - heh - rank amateurs in the abstract thought department.
Know what I mean? "Honey, a transcendental argument sets out to prove an a priori conclusion about the necessary structure of knowledge on the basis of an incontrovertible mental act - 'there are objects that exist in space and time outside of me,' he observes - but these don't live out your stupid CONSPIRACY THEORIES! We exist - they don't!"

Caroline looked at me for a second, scratched her belly and quietly turned back to her Kant.

More like it. With enough discipline and rational role models in her life, she'll come out just fine!

- Signing out with a smile and a song from the Big Isle,
HO!
Posted by Alex Constantine at 9:21 PM