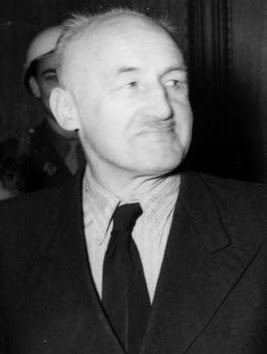 " ... Out of nowhere, with the rope around his neck, Julius Schtreicher - editor of Der Sturmer, the Nazi propaganda newspaper - shouted out with flaming hatred in his eyes, just as the trap door opened, "Purimfest 1946!" It was reported in the international press of the day. ... "
http://www.israelenews.com/view.asp?ID=3034

"Jewish festival celebrated in February or March (the 14th of Adar in the Jewish calendar), commemorating Esther, who saved the Jews from extermination by the Persian king's vizier (executive officer) in 473 BC during the Persian occupation. The festival includes a complete reading of the Book of Esther (the Megillah) in the synagogue, during which the listeners respond with stamping, whistling, and hissing to the names of the evil characters."
http://encyclopedia.farlex.com/Purimfest

... Streicher and the Nazis were close students of Jewish culture. They timed deportations and mass killings to coincide with Jewish holidays. They built anti-Jewish propaganda based on Jewish customs and observances – and one of their favorite holidays for this purpose was Purim.

"I am reading Saul Friedländer’s Nazi Germany and the Jews: Volume I, The Years of Persecution (also see this post), and in his discussion of the infamous anti-Semetic newspaper Der Stürmer, I happen to come across this timely mention of Purim (emphasis added)."

In its August 1935 issue (no. 35), Streicher’s paper took up a story previously published by the Reutlinger Tageblatt about a Jewish chemist, Dr. R.F., who had been accused of torturing a cat to death. According to Der Stürmer, in order to kill the cat, F. had tied it up in a sack, which he then threw onto the concrete in front of his door. “After that, he jumped with both feet on the poor animal, performing a true Negroe dance on it. As he could not kill the animal in that way, although it bled through the sack, he took a board and hit the cat with the edge until he killed it.” Der Stürmer linked the killing of the cat to “the slaughter of 75,000 Persians in the Book of Esther” and the killing of “millions of non-Jews” in “the most horrible way” in contemporary Russia. “The complacent bourgeois thinks far too little about what would happen in Germany if the Jews came to power once more,” Der Stürmer concluded. (p. 124)

Purim was a holiday which was important to the Nazis because it showed how bloodthirsty Jews really are.

In the Book of Esther, we read that in one bloody night the Jews slaughtered and destroyed 75,000 Persians. Even today, the Jew celebrates Purim to commemorate his great triumph. (Robert Ley, Pesthauch der Welt)

Purim was featured in the Nazi propoganda film The Eternal Jew and the Nazis saw Purim as part of a pattern of Jewish responsibility for tragic events in human history.

In other words, the Nazis were intimately familiar with Purim and viewed the holiday as an archetype for the Jews' supposed "bloodthirstiness."
Streicher, the publisher of Der Sturmer, by profession needed to be an expert on Jews and Judaism, and he needed to use JUdaism against the Jews. And so he did. Yelling "Purim Fest!" is not only unsurprising, but it fits perfectly with a lifetime of the man's work.