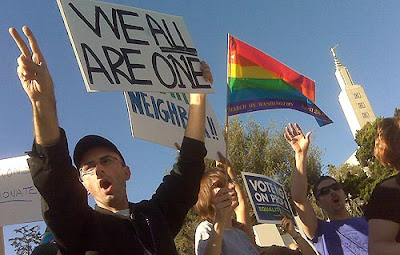 " ... Fortunately, the response of outraged citizens to such journalistic malpractice is also exempt from government intervention, thus we are free to excoriate this meretricious writing for the shame it brings to Time Magazine and its author. ... "

On Saturday, November 15th, 2008, Time published an incendiary piece of “reporting” by Alison Stateman, describing negative consequences experienced by supporters of California’s Proposition 8, with the sensationalistic title, “What Happens If You’re on the Gay ‘Enemies List.’”

The deeply flawed article is a completely one-sided attempt to portray these individuals and businesses as innocent victims of a vengeful, torch-and-pitchfork-wielding gay mob, bent on the destruction of any who dare to stand between them and their goal of legalized gay marriage. This article is nothing more than journalistic arson, as it appears to have been commissioned with the goal of pouring gasoline on the fire of extant rifts between various communities – while polarizing straight people, and African-Americans in particular, against the gay community.

That any high-school journalism student could piece together a more thoughtful and balanced discussion of the initiative’s fallout by performing simple web searches only makes Time’s choice to publish this offal more unforgivable. Perhaps her insufficiency as a reporter can be attributed to Ms. Stateman's role as managing editor of PR Tactics, the in-house magazine of the Public Relations Society of America.

Stateman begins by channeling Bill O’Reilly’s desperate effort to fan the flames of anger between the African-American and LGBT communities. She cites the suspect and unscientifically sampled CNN exit poll proclaiming that 70% of African-Americans voted in favor of the gay marriage ban, then makes unsourced claims of racist actions by opponents of Proposition 8, as follows:

"According to eyewitness reports published on the Internet, racial epithets have been used against African-Americans at protests in California, directed even at blacks who are fighting to repeal Proposition 8."

Setting aside the reality that one can find “eyewitness reports published on the Internet” that insist the US Government detonated the World Trade Center, and that Barack Obama was born in Kenya and ineligible to be President, it is clear that there was a great deal of overreaction to that statistic; and unfortunately some people who were crushed by Prop 8’s passage made inappropriate comments about the black community.

However, the article treats this single measure of African-American opposition to gay marriage equality as an unassailable gold standard, even as several intelligent analysts like Nate Silver have long noted the dangers of interpreting data that is itself a small subset of an already small sample. What’s more important is that it was the mainstream media’s relentless hyping of this CNN poll result that contributed to the climate of scapegoating and fueled such racist remarks. You know, just as Time is attempting to provoke anti-gay sentiment with this article.

The article also fails to note that a diverse set of civil rights advocacy groups, including the NAACP, have signed on to a legal challenge to Proposition 8, on the grounds that permitting an electoral majority to remove rights from a suspect minority class sets a chilling precedent that could redound negatively to other minority groups.

Next, the article invokes visions of the McCarthy era by talking in sinister tones about how “gay activists” are publishing blacklists of pro-Prop 8 donors to the web and calling for boycotts. Never mind that the source from which these nefarious “gay activists” are getting their dirt is California Secretary of State Debra Bowen’s office, as all financial contributions to political candidates and initiatives are public record. In fact, why not click this link and do some evil blacklist-making yourself? And never mind that groups such as the American Family Association have for years made boycotts of “pro-gay” companies like McDonalds, PepsiCo and Disney their stock in trade.

And while the practices of blacklisting and boycotting are something about which reasonable people can disagree, the article neglects to acknowledge that ProtectMarriage.com, the principal fundraising and advocacy group supporting Prop 8, sent letters signed by its board and counsel threatening entities that contributed to the No on 8 campaign with exposure as enemies of traditional marriage unless they made matching contributions to the Yes campaign. Note that Stateman also cites as a victim Bolthouse Farms, which, under pressure for its donation in favor of Prop 8, made comparable donations to organizations supporting marriage equality, again while failing to note that this was the precise goal of ProtectMarriage’s letter to No on 8 donors. After all, if your goal is to paint one side in a struggle as the villain, you can’t muddy the waters by pointing out that the side you are portraying as a victim engaged in the same behavior.

Next, arsonist Stateman moves to the story of Scott Eckern, artistic director of Sacramento’s California Musical Theatre, and his resignation after his contribution in favor of the referendum came to light. She gives short shrift to this particular saga, but two interesting points about it would have conflicted with the thesis of her story. First, one of the principal architects of the campaign to call out Eckern for his regrettable choice to finance Prop 8 was the presumably heterosexual actress, wife and mother Susan Egan, who wrote a widely circulated letter on the matter. Second, in speaking with individuals who actually work for CMT (you know, practicing that thing called journalism?), I learned that while gay staff members were hurt and heartsick over Eckern’s contributions, none with whom I spoke characterized him as a homophobe or bigot in the conduct of his life; and though it is an inconvenient truth to Stateman, some of the most aggressive calls for Eckern’s resignation came from straight employees of the organization.

Further, the article neglects to offer even one example of a person who has experienced a loss of employment due to their opposition to Prop 8. For that, one need turn no farther than Fresno, where Catholic priest Father Geoffrey Farrow was removed from his post after he came out to his parish as a gay man and urged them to vote no on 8.

Last, Stateman reports that supporters of Prop 8 have found it necessary to take down web lists of donors and supporters to protect them from the attack of evil blacklisting gays, again neglecting to mention that all such information remains available via simple search of the CA Secretary of State’s website. She unquestioningly quotes the "victim's spokesman" Frank Schubert, campaign manager for Yes on Proposition 8.

"No matter what you think of Proposition 8, we ought to respect people's right to participate in the political process. It strikes me as quite ironic that a group of people who demand tolerance and who claim to be for civil rights are so willing to be intolerant and trample on other people's civil rights."

Stateman fails to do her reporter’s duty to point out that, notwithstanding Schubert’s protestations to the contrary, no civil rights have been trampled on by any action of Prop 8 opponents. Prop 8 opponents are private citizens and not an arm of the government, and it is the government’s repression of speech which is prohibited by law. Just as Prop 8 proponents are free to advocate for their cause and make non-libelous statements about their opponents, so are Prop 8 opponents free to call attention factually to others' actions, and to advocate that people might exercise their freedom of association and choose not to patronize such businesses.

And likewise, the First Amendment’s protection of the press ensures that Time Magazine and Alison Stateman can publish factually correct, but grotesquely imbalanced, treatises whose goal is to foment anger and rage against a widely-hated minority group, and experience no governmental action in return.

Fortunately, the response of outraged citizens to such journalistic malpractice is also exempt from government intervention, thus we are free to excoriate this meretricious writing for the shame it brings to Time Magazine and its author. Thus we can call for Time to throw a bucket of cold water on the fire it has stoked and apologize to its readers for printing this shoddy reporting, and begin publishing well-written articles by thoughtful individuals who have no agenda to promote but the truth.

http://narcosphere.narconews.com/notebook/allan-brauer/2008/11/arson-time-magazine-and-alison-stateman-pour-gasoline-fire
Posted by Alex Constantine at 8:47 AM