“ ... 'In retrospect, that should have been disclosed,' he said. ... Dr. Goodwin earned around $20,000 from GlaxoSmithKline, which for years suppressed studies showing that its antidepressant, Paxil, increased suicidal behaviors. ... " 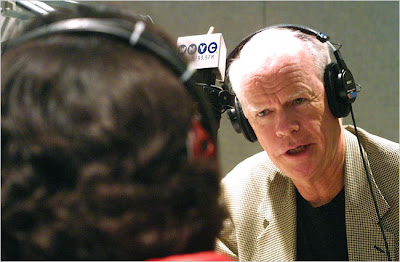 An influential psychiatrist who was the host of the popular NPR program “The Infinite Mind” earned at least $1.3 million from 2000 to 2007 giving marketing lectures for drugmakers, income not mentioned on the program.

The psychiatrist and radio host, Dr. Frederick K. Goodwin, is the latest in a series of doctors and researchers whose ties to drugmakers have been uncovered by Senator Charles E. Grassley, Republican of Iowa. Dr. Goodwin, a former director of the National Institute of Mental Health, is the first news media figure to be investigated.

Dr. Goodwin’s weekly radio programs have often touched on subjects important to the commercial interests of the companies for which he consults. In a program broadcast on Sept. 20, 2005, he warned that children with bipolar disorder who were left untreated could suffer brain damage, a controversial view.

“But as we’ll be hearing today,” Dr. Goodwin told his audience, “modern treatments — mood stabilizers in particular — have been proven both safe and effective in bipolar children.”

In an interview, Dr. Goodwin said that Bill Lichtenstein, the program’s producer, knew of his consulting but that neither thought “getting money from drug companies could be an issue.”

“In retrospect, that should have been disclosed,” he said.

But Mr. Lichtenstein said that he was unaware of Dr. Goodwin’s financial ties to drugmakers and that, after an article in the online magazine Slate this year pointed out that guests on his program had undisclosed affiliations with drugmakers, he called Dr. Goodwin “and asked him point-blank if he was receiving funding from pharmaceutical companies, directly or indirectly, and the answer was, ‘No.’ ”

Asked about the contradiction, Dr. Goodwin and Mr. Lichtenstein each stood by their versions of events.

“The fact that he was out on the stump for pharmaceutical companies was not something we were aware of,” Mr. Lichtenstein said in an interview. “It would have violated our agreements.”

Margaret Low Smith, vice president of National Public Radio, said NPR would remove “The Infinite Mind” from its satellite radio service next week, the earliest date possible. Ms. Smith said that had NPR been aware of Dr. Goodwin’s financial interests, it would not have broadcast the program.

Sarah Alspach, a spokeswoman for GlaxoSmithKline, said, “We continue to believe that healthcare professionals are responsible for making disclosures to their employers and other entities, in this case National Public Radio and its listeners.”

“The Infinite Mind” has won more than 60 journalism awards over 10 years and bills itself as “public radio’s most honored and listened to health and science program.” It has more than one million listeners in more than 300 radio markets. Mr. Lichtenstein said that the last original program was broadcast in October, that reruns have been running since and that “the show is going off the air.”

The program has received major underwriting from the National Institutes of Health and the National Science Foundation, both of which have policies requiring grantees to disclose and manage conflicts of interest. Mr. Grassley wrote letters to both agencies asking whether disclosure rules were followed for the grants. Spokesmen for both agencies said they were cooperating with the investigation.

Mr. Grassley is systematically asking some of the nation’s leading researchers and doctors to provide their conflict-of-interest disclosures, and he is comparing those documents with records of actual payments from drug companies. The records often conflict, sometimes starkly.

In October, Mr. Grassley revealed that Dr. Charles B. Nemeroff of Emory University, an influential psychiatric researcher, earned more than $2.8 million in consulting arrangements with drugmakers from 2000 to 2007, failed to report at least $1.2 million of that income to his university and violated federal research rules. As a result, the National Institutes of Health suspended a $9.3 million research grant to Emory, and Dr. Nemeroff gave up his chairmanship of Emory’s psychiatry department.

In June, the senator revealed that Dr. Joseph Biederman of Harvard, whose work has fueled an explosion in the use of powerful antipsychotic medicines in children, had earned at least $1.6 million from drugmakers from 2000 to 2007, and failed to report most of this income to Harvard.

Mr. Grassley’s investigation demonstrates how deeply pharmaceutical commercial interests reach into academic medicine, and it has shown that universities are all but incapable of policing these arrangements. As a result, almost every major medical school and medical society is reassessing its relationships with makers of drugs and devices.

“We know the drug companies are throwing huge amounts of money at medical researchers, and there’s no clear-cut way to know how much and exactly where,” Mr. Grassley said. “Now it looks like the same thing is happening in journalism.”

Mr. Grassley has proposed legislation that would require drugmakers to disclose all payments of $500 or more to doctors. Eli Lilly and Merck have promised to begin doing so next year.

Dr. Goodwin has written an influential textbook on bipolar disorder and is an adjunct professor at George Washington University. In an interview, he blamed a changing ethical environment for any misunderstandings with Mr. Lichtenstein about his consulting arrangements. “More than 10 years ago, when he and I got involved in this effort, it didn’t occur to me that my doing what every other expert in the field does might be considered a conflict of interest,” Dr. Goodwin said.

He defended the views he expressed in many of his radio programs and said that, because he consulted for so many drugmakers at once, he had no particular bias.

“These companies compete with each other and cancel each other out,” he said.

Industry critics dismiss that view, saying that experts who consult for drugmakers tend to minimize the value of nondrug or older drug treatments.

In the fine print of a study he wrote in 2003, Dr. Goodwin reported consulting or speaking for nine drugmakers, including Pfizer, Johnson & Johnson and Novartis. Mr. Grassley asked for payment information only from GlaxoSmithKline. Dr. Goodwin said that in recent years, GlaxoSmithKline paid him more than other companies.

He said that he had never given marketing lectures for antidepressant medicines like Prozac, so he saw no conflict with a program he hosted in March titled “Prozac Nation: Revisited.” which he introduced by saying, “As you will hear today, there is no credible scientific evidence linking antidepressants to violence or to suicide.”

That same week, Dr. Goodwin earned around $20,000 from GlaxoSmithKline, which for years suppressed studies showing that its antidepressant, Paxil, increased suicidal behaviors.

Tom Rosenstiel, director of the Project for Excellence in Journalism, said that although concerns about news media bias were growing, few people believed that journalists took money from those they covered. Disclosures like those surrounding Dr. Goodwin could change that, “so this kind of thing is very damaging,” Mr. Rosenstiel said.