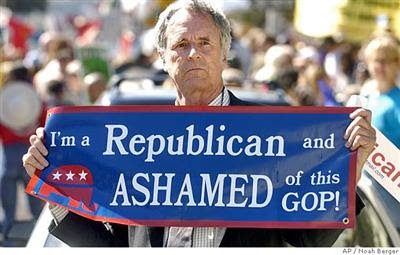 I get the impression that a great many people are upset by all the news about McCain-Palin supporters who believe Obama is an Arab, a Muslim, a terrorist, and a baby killer. I find it the most encouraging thing that's happened in eight years.

Why? Because these sorts of lies and fear-mongering are nothing new. What's new is that the U.S. corporate media is covering them. The most unaccountable, antidemocratic communications cartel outside of China has decided to cover in a major way a story it has brushed aside since September 12, 2001.

Of course, we understand why. The victim of these particular lies is a corporate-friendly senator who appears likely to be elected president of the United States. On top of that he isn't actually a Muslim or a foreigner, so you can still be bigoted and defend him on the basis of those boring old leftwing things: facts. But the media willingness to cover the hate speech and to point out the connections between hateful speech and hateful actions makes Obama more likely to win the election and makes us all safer, wiser, and better informed.

It's not that the media has never covered hateful, racist, and bigoted speech before, but it hasn't done so in a major way with front page stories and saturation chatter on the blab shows. In fact, a lot of U.S. newspapers recently mailed their subscribers a disc called "Obsession" that promoted fear and hatred of Muslims. A couple of columnists mentioned that fact, but it was not made into a STORY, into something that everybody has to have an opinion on and reiterate so many times that people actually hear it. And it's not that the media has never before pointed out contradictions between a candidate's advertisements or flyers and that same candidate's comments, but it hasn't done so in a BIG way. In fact, McCain has been advertising himself as a crusader against corporate power for many months without a peep of hysterical laughter from the recipients of all that advertising money.

This is different. Now we've got talking heads actually thinking through the problem on the air, wondering whether McCain can control the Frankenstein monster he's created out of his racist, ill-informed supporters. Some outlets are focusing on McCain's rebuking of his overly open and honest followers, but even there the reporters are supporting the rebuking. Other outlets are focusing on the cold-blooded electoral calculation: if too many "moderates" are scared off by bloodthirsty loonies, will McCain be able to win? But even there the reporters are supporting the idea that those who do not hate dark-skinned foreigners are on the side of sanity and acceptability. When Joe Klein thinks you've crossed the line, there's nobody in the corporate media with lower standards that could jump up in defense of the McCain-Palin lynch mobs. Even David Frum agrees.

But where was all this interest when we started locking up and deporting people seven years ago, or when every new grotesque truth has slipped out through the bars of Guantanamo's animal cages, or when we slaughtered over a million human beings in Iraq? Can we expand this discussion beyond the slandering of one politician to address the entire idea of racist and religious hatred? Can we move this to the point that it makes no sense to defend someone against the charge of being an Arab by asserting that, on the contrary, he's a decent family man?

Some friends and I are interested in trying, and we'll start at Sarah Palin's rally in Richmond, Virginia, on Monday. If you'd like to come, just go here and print out as many tickets as you feel like. But whatever you do, don't give any tickets out to the wrong sort of people. You know the ones I mean: people who don't want to kill Obama and people who do but talk about it too much.