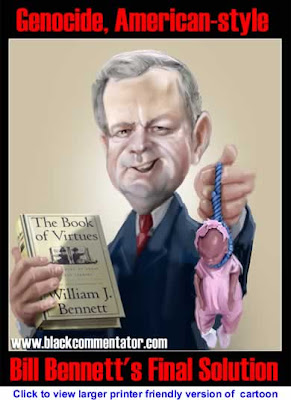 "This is tough news. It's not pleasant to hear," said former Education Secretary William Bennett on ABC's This Week Nov. 9. "But it's very important, and it's part of telling the truth." The occasion for tough-but-needed truth telling: Bill Clinton's first-ever presidential speech to an organized gay-rights group, the Human Rights Campaign. Clinton had conferred respectability--wrongly--on the gay quest for approval when in fact, said Bennett, he "should tell the truth on this one": Homosexuality "takes 30 years off your life." The average life expectancy for gay men, Bennett declared, was just 43.

Many a mother's heart around the country must have sunk at that moment amid premonitions that she would outlive her son. A well-known public figure would think twice before delivering tidings that grim, right? And Bennett's statistic was no slip. Only days later, in the Nov. 24 Weekly Standard, he repeated the assertion phrased for maximum emphasis:

"The best available research suggests that the average life span of male homosexuals is around 43 years of age. Forty-three." (Italics his.)

Yes, it's a sensational, arresting number, which may soon pass into general circulation. Already, for example, the National Review has repeated it unskeptically in an editorial. Where did the figure come from, and how plausible is it?

Bennett got the number from Paul Cameron, a researcher well known to followers of gay controversies. Cameron, a former assistant professor at the University of Nebraska who has consulted for such gay-rights opponents as former Rep. William Dannemeyer, R-Calif., heads a group called the Family Research Institute. Cameron resigned under fire from the American Psychological Association and was later formally terminated from membership following complaints about his research methods. He has had run-ins with other professional groups, including the Nebraska Psychological Association and the American Sociological Association.

According to Mark Pietrzyk's exposé in the Oct. 3, 1994, New Republic, the state of Colorado initially hired Cameron as an expert witness to defend its statute restricting gay-rights ordinances, then elected not to use his testimony after it got a closer look. His life-span figures have circulated for years in religious-right circles, but Bennett's comments appear to represent their first real breakout into wider public discussion.

Cameron's method had the virtue of simplicity, at least. He and two co-authors read through back numbers of various urban gay community papers, mostly of the giveaway sort that are laden with bar ads and personals. They counted up obituaries and news stories about deaths, noted the ages of the deceased, computed the average, and published the resulting numbers as estimates of gay life expectancy.

What do vital-statistics buffs think of this technique? Nick Eberstadt at the American Enterprise Institute sums up the reactions of several of his fellow demographers: "The method as you describe it is just ridiculous." But you don't have to be a trained statistician to spot the fallacy at its heart, which is, to quote Centers for Disease Control and Prevention statistician John Karon, that "you're only getting the ages of those who die." Gay men of the same generation destined to live to old age, even if more numerous, won't turn up in the sample.

Other critics rattle off further objections. The deaths reported in these papers, mostly AIDS deaths, will tend to represent the community defined by such papers or directly known to their editors. It will include relatively more subjects who live in town and are overtly gay and relatively few who blend into the suburbs and seldom set foot in bars. It will overrepresent those whose passing strikes others as newsworthy and underrepresent those who end their days in retired obscurity in some sunny clime.

Bennett is a busy man, but even he has access to the back of an envelope. A moment's thought might have suggested a few simple test calculations. Suppose he assumes--wildly pessimistically, given current incidence data--that half the gay male population is destined to catch the AIDS virus and die of it. The actual average age of AIDS patients at death has been about 40.

(Presumably protease inhibitors will extend average longevity, but that will only increase Bennett's difficulty.) For the number 43 to be the true average death age for the entire population of gay males, HIV-negative gay men would, on average, have to keel into their graves at 46. Looked at another way, if even half the gay male population stays HIV-negative and lives to an average age of 75, an average overall life span of 43 implies that gay males with AIDS die at an implausibly early average age (11, actually).

Against this, Cameron and his supporters argue that, according to their survey of obits, even if they don't have AIDS, homosexual males tend to die by their mid-40s (and lesbians by their late 40s). Some downright peculiar results followed from this inference. One is that--contrary to the opinion of virtually everyone else in the world--AIDS in fact hasn't reduced gay males' life expectancy by that much--a few years, at most. Moreover, the obits also recorded lots of violent and accidental deaths. From this Cameron and company concluded not that newsworthy deaths tend to get into newspapers, but that gays must experience shockingly high rates of violent death. With a perfectly straight face they report, for example, that lesbians are at least 300 times more likely to die in car crashes than females of similar ages in general.

Unfortunately there really is no satisfactory measure of actual life expectancy among gay men. However, Harry Rosenberg, the mortality-statistics chief at the National Center for Health Statistics, says he's unaware of evidence that HIV-negative gays have a lower life expectancy than other males. Rosenberg also points to one reason to think the HIV-negative gay male may actually live longer on average than the straight male: Gays may have higher incomes and more education on average than straights--two factors powerfully correlated with longer life spans. (Bennett himself appears to share this view, terming gays, "as a group, wealthy and well educated.")

Challenged by the Human Rights Campaign's Elizabeth Birch in the letters column of the Dec. 8 Standard, Bennett, remarkably, dug in to defend the Cameron numbers, which he said coincided with the views of other authorities such as psychiatrist Jeffrey Satinover. Satinover's 1996 book, Homosexuality and the Politics of Truth, does discuss gay life spans, but cites as its authority ... Cameron's study. In other words, Bennett is not adducing a second authority for his assertions but merely falling back on the first via its recycling by another writer.

Throughout the controversy, Bennett has made much of the cause of "truth" with a capital T. His Standard article, portentously titled "Clinton, Gays, and the Truth," accused the Clintonites of scanting that important commodity. Bennett is right to the extent that there's no excuse for telling falsehoods in the course of raising otherwise legitimate issues. He should mind his own lesson.