Should Modern Warfare 2 Allow Us to Play at Terrorism?

Leaked footage of a controversial airport level in Modern Warfare 2 has caused a wave of controversy online... 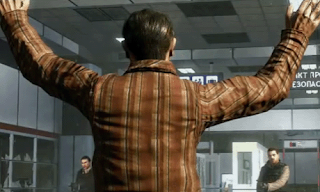 Modern Warfare 2: could you shoot this man? You may be about to find out...

The video is a few minutes long, but it might just be the most important game footage to be seen this year. It's a bootleg of a single mission from Modern Warfare 2, the much-anticipated first-person shooter, certain to be the winter's biggest selling game. It shows the player joining Russian terrorists on a bloody rampage through an airport building; civilians are gunned down as armed men run through the departures lounge, and it's evident that the player is firing too. In one alarming moment someone is shown dragging an injured person across the concourse – the player shoots them both dead.

Released onto the internet earlier this week, the blurry footage has already provoked a media backlash, a Mirror headline proclaiming, "leaked level makes light of terrorist atrocities." Many see in it harrowing evocations of last year's Mumbai terror attacks in which over 170 people were killed. For a while, it wasn't clear whether the sequence was genuine, but yesterday, Activision released a statement confirming its authenticity:

"The leaked footage was taken from a copy of game that was obtained illegally and is not representative of the overall gameplay experience in Modern Warfare 2. Infinity Ward's Modern Warfare 2 features a deep and gripping storyline in which players face off against a terrorist threat dedicated to bringing the world to the brink of collapse. The game includes a plot involving a mission carried out by a Russian villain who wants to trigger a global war. In order to defeat him, the player infiltrates his inner circle. The scene is designed to evoke the atrocities of terrorism.

"At the beginning of the game, players encounter a mandatory 'checkpoint' in which they are warned that an upcoming segment may contain disturbing elements, and they can choose not to engage in the gameplay that involves this scene."

So what should we make of all this?

Clearly, once again, we will be confronted with difficult questions about the role and duty of videogames as an entertainment form. To some commentators, videogames by their very nature, 'make light' of anything they portray. This is partially about semantics; the interpretation of the word 'game' as something fundamentally frivolous. Partly, too, it is about the legacy of videogames as a pastime for children, for teenagers – not for adults.

And then interactivity itself brings in complex moral questions. If a movie were to depict a terrorist outrage, the viewer takes no active part. But in a videogame, you're engaged and complicit. The participation is the entertainment, and that's always going to be problematic. Activision's argument about seeking to portray the depths of the terrorist cell's immorality in order to stir the player's emotions is sound to a point – it's an established narrative device. But as Tom Hoggins asks in his Telegraph feature, is it really necessary for the player to throw grenades? And wouldn't similar revulsion be elicited if the player were placed into the shoes of one of the victims? This would, after all, reflect the wonderful opening sequence to the original Modern Warfare, in which the player takes on the perspective of a prisoner who is bundled into a car and later executed.

This is also not the first time that the Call of Duty series has forced the player into a morally troublesome sequence. There is at least one moment in Call of Duty: World at War (admittedly created by a different development studio, but still part of the CoD lineage), in which the player has no choice but to shoot a group of unarmed enemy soldiers in order to complete a mission objective. Is there an agenda here to push the boundaries of acceptability in shoot-'em-ups? It's a brave move if there is.

On top of it all, context itself is a problematic notion. In this case it appears both vital and valid. What we're robbed of when viewing this illicit footage is what happens before and afterwards, the exact nature of the scene, and the authenticity of the player's involvement. It's certainly far too early for tabloids to be bandying accusations about – but then, when did that ever stop them?

The problem is, context can easily become an excuse to portray wanton violence. In the PlayStation title Driver, for example, the gamer is ostensibly controlling an undercover policeman posing as a criminal, but this backstory is immaterial to the game action, which involves stealing cars, smashing other vehicles out of the way – and having lots of fun in the process. That's a very different game, and a very different circumstance, but it's an example of how the framework can be bent to suit the core game dynamic.

I'm also not sure about Activision's plaintive claim that the scene can be skipped. It's something of a cop-out, a side-step, rather than a pertinent justification. The point is, it's there – the developers put it there. It is an intended element of the whole experience.

Responsibility is the underlying theme in all this. I think this is the deciding factor. Infinity Ward is an excellent developer, it uses narrative in a mature and sophisticated way. Witness the nuclear explosion sequence and the apparent death of Captain Price in Modern Warfare; these are moments of sheer emotional resonance, which would have been fumbled by most studios – indeed they wouldn't even have been attempted by most studios. Both moments work perfectly within the game's depiction of a desperate global battle. I'm certain that will be the case here. This development team has no need for cheap controversy, it doesn't have to appeal to the basest instincts of nihilistic teen gamers looking for a few cheap sick thrills.

That is why this blurry, inconclusive footage is so important. The scene portrayed may well represent a statement of intent: this is what games are capable of now – unsettling us with powerful imagery, backing us into difficult situations, toying with our moral certainties. It is an 18 certificate game. We must be trusted to test ourselves against this.