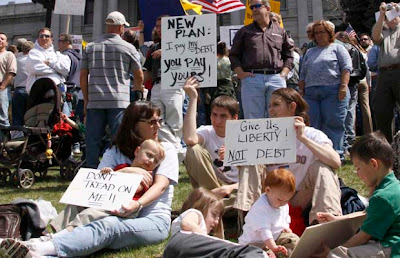 " ... In yet another tea-bag day controversy, Fox anchor Neil Cavuto was captured on an open mic discussing the crowd numbers with an on-location producer, estimating the turnout at 5,000 people, but minutes later Cavuto told viewers that 'They were expecting 5,000 here, it's got to be easily double, if not triple that.' ... "

A family holds signs at a "tea party" protest on the grounds of the Colorado tate capitol in Denver April 15, 2009. Protests were held in many U.S. cities loosely inspired by the 1773 Boston Tea Party rebellion against British colonial taxes, which helped spark the American revolution. The crowds demonstrated against taxes, government bailouts and U.S. President Barack Obama's budget proposal.

A reportedly corporate-financed grassroots" anti-tax movement, paid for, planned and promoted by right wing think tanks, corporate lobbyists and Fox News Channel, has failed to bring about the "popular uprising" against the Obama administration its creators had hoped for.

The day of "tea parties" were pushed by Republican operatives and partisan advocacy groups such as FreedomWorks, a conservative advocacy group helmed by former Republican House Majority Leader Dick Armey. Organizers sought to encourage protest over the Obama government's tax and stimulus policies by asking people to wave tea bags, but the national event brought about only a few hundred "tea-baggers" in most parts of the U.S., despite relentless promotion by Fox News TV hosts.

Participants had hoped to rally hundreds of thousands of people to begin a grassroots movement that would force Obama to change government policy. But the turn-out was far from what was hoped for, with most rallies looking decidedly on the small side, especially compared to the 2006 immigrants rights rallies or the 2004 pro-choice march on Washington, both of which attracted millions. 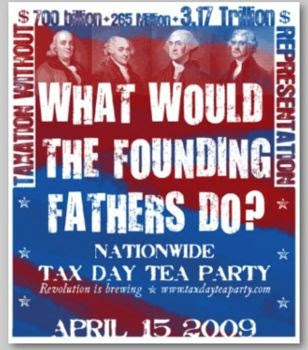 Those that did show up to the right wing event Wednesday didn't hold back from expressing their thoughts on government. Protest signs seen in the Washington D.C. tea-bag protest featured slogans such as "Commander in Thief," "Party like it's 1773" and "Hang 'em high," the latter also featuring a list of Democrats the sign holder wants taken to the gallows. Another stated, "The American taxpayers are the Jews for Obama's ovens" [link].

According to reports, organizers of the D.C. event were told by National Park Service officials that the "million tea bags" they had hauled in on the back of a pickup would have to be taken away, rather than be dumped as planned. They reportedly complied with the request after realizing they didn't have the correct protest permit.

The Competitive Enterprise Institute, a local think tank, offered to provide its 12th floor board room as an alternate venue to dump the tea bags.

A 68-year-old woman at the Sunbury Pennsylvania protest had to be rescued by police from the Susquehanna River when she inadvertently fell in while trying to dump tea bags in it.

White House press spokesman Robert Gibbs said of the protests, "I don't know if the President is aware of the events. I think the President will use tomorrow as a day to have an event here at the White House to signal the important steps in the economic recovery and reinvestment plan that cut taxes for 95 percent of working families in America, just as the President proposed doing; cuts in taxes and tax credits for the creation of clean energy jobs."

Rising popularity in the polls for President Barack Obama, a strengthening economy, and the unfortunate choice of name for the movement ("tea-bagging" is slang for a sexual act) are considered the prime reasons for the failure of the event, but recent exposure of the groups behind the protests also drove some away from taking part.

In the days leading up to the supposedly grassroots event, the New York Times' Paul Krugman noted, "a key role is being played by FreedomWorks, an organization run by Richard Armey, the former House majority leader, and supported by the usual group of right-wing billionaires. And the parties are, of course, being promoted heavily by Fox News."

The involvement of a news channel in promoting a partisan event has caused many to give the political tilt of Fox News a second look.

In the lead-up to the event, Fox News featured 9 segments and 40 promos over just two days, according to the watchdog website Media Matters. Over a one week period, 10 in-show promos were given by Fox presenter Sean Hannity, while Neil Cavuto and Glen Beck delivered 5 each. Cavuto did seven news segments on the event. All Fox News shows featured commercials advertising the protests during that time, and they were regularly described as "FNC [Fox News Channel] Tax Day Tea Parties" by on-air personalities.

In addition, Fox News contributors were listed as "Tea Party Sponsor[s]" on the website promoting the event, while appearances by Fox personalities were used to promote individual rallies.

Fox News anchor Cody Willard, reporting from one of the protests, even went so far as to say on the air, "Guys, when are we going to wake up and start fighting the fascism that seems to be permeating this country?"

In yet another tea-bag day controversy, Fox anchor Neil Cavuto was captured on an open mic discussing the crowd numbers with an on-location producer, estimating the turnout at 5,000 people, but minutes later Cavuto told viewers that "They were expecting 5,000 here, it's got to be easily double, if not triple that."

http://www.vancouversun.com/News/News+sponsored+parties+fail+ignite+popular+uprising+among+conservatives/1499732/story.html
Posted by Alex Constantine at 8:55 AM