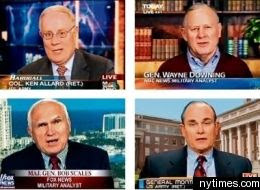 DoD DoubleSpeak recalling the ridiculous definition of torture "debate": " ... The Pentagon's inspector general report released January 14 ... stated that absent a clear, legal definition of propaganda, there was an 'insufficient basis' to find that the effort violated the law or internal policy. ... 'To say there are factual inaccuracies in this report is the understatement of the century.' ... I think it is a whitewash. It appears to be the parting gift of the Pentagon to [former President George W. Bush].' ... "

The Department of Defense's inspector general determined that a controversial Pentagon program that briefed TV and radio military analysts on the wars in Iraq and Afghanistan did not violate government policies or regulations. The internal investigation found that the Pentagon's public affairs strategy on outside analysts, although framed in a negative light last April in a New York Times report, is in compliance with the law and the department's own policies.

The New York Times reported nearly a year ago that the Defense Department was influencing an apparatus of former military personnel as “surrogates” or “message force multipliers” to increase public support for its actions in Iraq and Afghanistan. Forty-five members of Congress called for inquiries into the program shortly thereafter, with some claiming that the effort constituted an illegal propaganda campaign directed at the US public.

The Pentagon's inspector general report released January 14, however, stated that absent a clear, legal definition of propaganda, there was an “insufficient basis” to find that the effort violated the law or internal policy. The report also found there was no basis to claims that analysts used their access to Pentagon officials to create a competitive advantage for companies.

“The comptroller general has interpreted the publicity and propaganda riders to prohibit three type of activities – self-aggrandizement or puffery, partisanship, and covert communications,” the report stated. “Applying these standards, we found the evidence insufficient to conclude that [retired military analyst] outreach activities were improper.”

Derek LaVallee, VP of Waggener Edstrom's public affairs practice and a former White House and Pentagon aide, says that some of the public might find “the fact that there is a ‘spin' and ‘message' from [the Defense Department] about war... unsettling,” but that is a “very naïve view.”

He notes that it is not illegal or unethical for the Defense Department to actively influence analysts. There is also little for the Pentagon to publicly disclose about such a strategy, assuming that it is not paying analysts for their views and that the commentators are not actively lying about military matters.

“There was no exchange of funds,” LaVallee says. “Didn't those who opposed the department's point of view have an equal opportunity to persuade the analysts? Don't we want the analysts to get as much inside information as possible to give informed analysis?” LaVallee asked.

Robert Tappan, president of Weber Merritt Public Affairs and a former state department official who crafted strategic messaging for the Coalition Provisional Authority in Iraq in 2004, says that the inspector general's findings “resoundingly vindicated” the Department of Defense.

“The inspector general's report found no instances of wrongdoing on the part of anybody at the Department of Defense public affairs, and from my familiarity with that at [the State Department] and in Iraq, that bears what my experience has been,” he says. “The [public affairs staff] at the Department of Defense are very proficient, and they follow rules that have precedents that go back many years as to media relations and other aspects of communications.”

The Department of Defense did not return phone calls by press time.

Not everyone agreed with the inspector general's assessment. After the finding was released, US Rep. Paul Hodes (D-NH) told the Times that the report was a political statement on behalf of the Department of Defense.

“To say there are factual inaccuracies in this report is the understatement of the century,” he told the Times. “I think it is a whitewash. It appears to be the parting gift of the Pentagon to [former President George W. Bush].”

Two other inquiries into the controversial program are scheduled to be released in coming months by the Government Accountability Office and the Federal Communications Commission.